skip to main | skip to sidebar

So what do you do when it is Sunday afternoon, you are trying to take a nap but the boys are loudly watching the KU basketball game and phones keep going off.  You get up off your lazy bum and go in the kitchen with your daughter and make cookies.  These are so so easy. 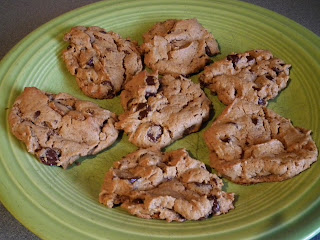 Mix first four ingredients together.  Then add the chocolate chips.  Bake at 350 degrees for approximately 9 minutes.  So easy when you just need something sweet.

I made a wonderful desert this week.  I used my flan pans that my husband bought me a few years ago.  I told him I just had to have them but I have only used them a few times.

﻿ ﻿ I took a chocolate cake mix and mixed it by the box directions. You can use whatever flavor you want.  Pour it into 2 well greased and sugared flan pans.  Bake according to the box.


﻿ ﻿
Once the cake is done and cooled, mix together 8 ounces of cream cheese with 1 cup of powered sugar.
Split between the two cakes and fill the center of the cake.  Top the cream cheese mixture is in the pan with cool whip.  This time I put strawberries on mine since I still had a few but I have also used cherry pie filling.  I think I might try peaches some time.

We are on spring break this week and until today it has really felt like spring.  It has just been a wonderful, welcome change. So to celebrate the first full day of spring this last Monday I made some strawberry jam.  The strawberries were on sale for an unbelievable price of .99.  I also put some in the freezer so we can make smoothies when it gets warm again.  Here are a few pictures of the wonderful strawberries. 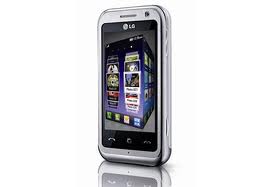 Yesterday I received a phone call from my son.  I thought he was saying, "I just got in a wreck, I laid my phone down and it was stolen."  But he actually said, "Mom I am at the Rec. had my phone laying down and somebody stole it."  As you know Ryan is away at college.  The Rec. is the place he works out everyday because he loves to work out.  I guess he and his buddy a long with other people always leave there bags and phones on a table.  Well this time somebody decided to steal his phone.  Ugh.  What is it this week with people stealing my kids things.  Well I called and called and called even left a few nasty messages for the thief.  Finally I called our phone carrier and had his phone suspended.  So if they were planning to use the phone on my dime that won't be happening but of course if they just needed a new phone and put their Sim card in it, well I guess Happy Birthday to them.  Then Ryan told me on his phone which is all touch he had programed a special swipe so no one could get in his phone.  I guess that means unless the thief is lucky and figures out the swipe, the phone is no good to him.  Ryans expensive phone that we just bought him at Christmas will probably be in the bottom of a trash some where.

I know, I know with both my kids it was just stuff that was stolen and I am so thankful both of them are ok.  GPS stolen ok can live with out, camera I guess she can live without but messing with mommas way of communicating with her son, NOT OK.  Ryan went to the phone store to see what a phone would cost to buy out right, way to expensive.  So he got on E-Bay last night and found a phone that he wanted and was very affordable.  He should have it Friday of Saturday.  In the mean time he has given me his room mates phone number if I should have to reach him.

Man is it really only Wednesday?

Here are a few pictures taken with the new camera by my hubby.  He knows I just love seeing this cardinal.
Little things make me happy. 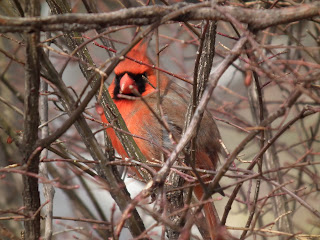 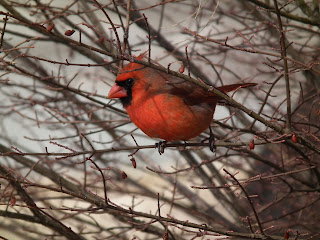 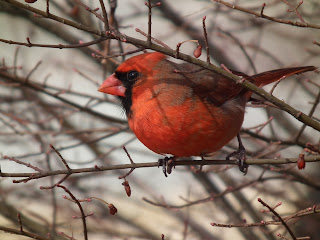 Doesn't he make you excited for spring.  He is just gorgeous.
Blessings
Crystal
at 5:25 AM 2 comments
Labels: This and That 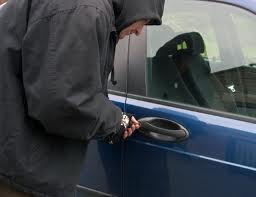 Sunday morning as we were getting ready for church my phone rings.  It is Alyssa, I say hello and all I hear is sobbing on the other end and her going mom, mom.  I say Alyssa what is wrong?  Still all I hear is sobbing.  Of course my heart drops, my mind starts wondering what kind of trouble is she in.  She says my car was broken into.  What do I do?  Do I call the police?  Do I call 911?  I said yes you call the police and yes call 911.  She calls the police and calls me back, she says they stole her GPS which is actually her brothers GPS and her camera. Ugh.  They also stole her wallet which she had hidden.  Double Ugh.  She did not have her debit card in there but guess whose she did have in there.  Yep MINE!!!  We gave it to her in case her or her brother would have an emergency and need cash right away.  Neither of them have had to use it luckily.  But it was my 2nd debit card and of course my first one is in my wallet with the same exact number.  So I had to cancel it.  Now she has to go get a new drivers license which will cost around 26.00, put an alert on her SS# because that was in there also and get a new card for school.  They got a Sonic gift card and a Starbucks gift card.  So at least the thieves can have a meal and a cup of coffee.  I will have to go to the bank tomorrow to get signed up for a new debit card.  At least I will save money this week since I don't have it and I don't like to write checks.  I am just thankful she is ok and her car is ok.  They must of had something to hit her lock because her windows were not broke or anything.  She said the policeman was really nice and her brother who is at the same college as her called her to make sure she was ok and ask her if she needed anything.  (what a sweet little brother.) He also told her not to worry about the GPS.  It is not big deal. She has learned her lesson I think about leaving her wallet in her car even if it is hidden.  It is terrible that sometimes we have to learn things the hard way.

Please say a prayer for her.  She has been going through a lot lately and she feels as if God and the world are against her.  I have told her other wise but you know how it is?  After all that Sunday morning she still made it to church so she is hanging in there.


Update: Sunday afternoon.  She said I got on Face book and this girl messaged me and said I found your Social Security card and your wallet and a bunch of stuff in a parking lot.  So the girl and her friend picked it all up and got on Face book to find Alyssa.  Alyssa got in contact with the girl and picked up her wallet.  She checked everything and said all that was missing now were her gift cards, my debit card, the camera and GPS.  She feels a little better since a few of her things were found like the ever so important Social Security card.  I asked her why are you caring your SS card in your purse?  She said Friday at home I usually just have my SS card in my room but I had a bad feeling, like it was going to be stolen, and I thought I should put it in my wallet. (She lives in a house with girls in a nice neighborhood but does not like to be by herself or at the house to much.  She feels as if someone is going to break in all the time.)  So she has now found a better place than her wallet.  As she was picking up her wallet she saw a guy looking at his car.  His window was broken out and had some things stolen.  Who knows who else they got.

We are just so thankful for the way things turned out.  It could have been a lot worse.


Crystal
at 5:21 AM 4 comments
Labels: Alyssa, Alyssa and College

Courtney had a volleyball tournament today.  I just love watching her play.  She plays setter most of the time and sometimes she will be a hitter.  Here are a few pictures I took with my new camera.  Remember it was my first time using it and they are not great.  I have a lot to learn with this thing. 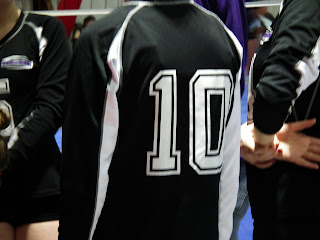 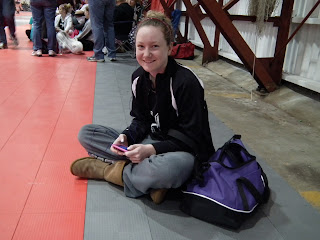 Waiting to get started.  Always on her I-Pod 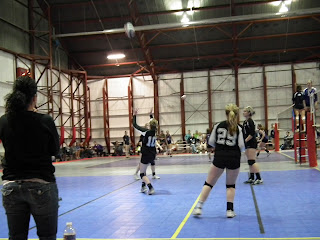 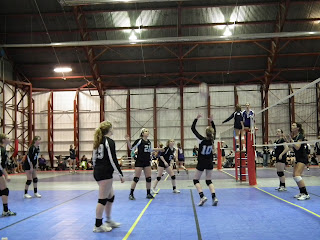 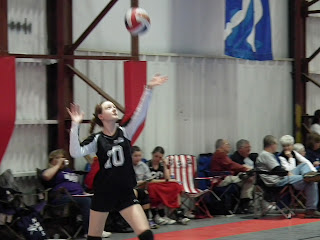 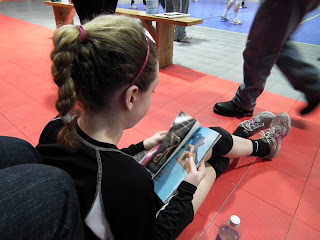 Reading her friends magazine while waiting for the next game. 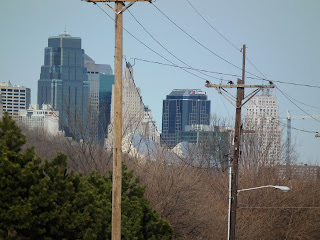 Random picture of downtown.  I just love sky lines.  Would have been better without those silly poles

I was the winner

Again I have not taken the time to write anything for a while.  I always go and visit other blogs but never take the time to work on mine.  A while back I won the greatest little Canvas print.  I just love pictures of farm houses.  I plan on hanging it in the family room with a few others I have but have not done it yet.  I am trying to decide if I should paint first or not.  Anyway I won it from the Karen at Stairstep Boys she is so cute and I just love her blog.  Here is a picture of the print. 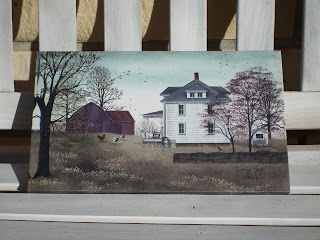 My husband also bought us/ME a new camera.  It is a fancy one to me and I am learning to use it.  It has so many options on it.  I just love it but I need to take a class to learn everything about it.  Here is a picture of the one he bought us/ME. 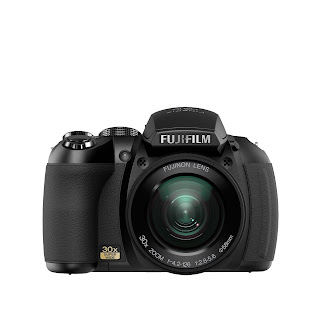 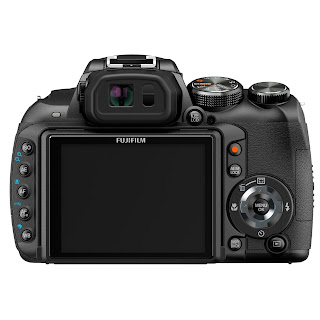 Very nice don't you think.  I am excited to take it to Courtney's volleyball tournament tomorrow.  Maybe I can really get some good pictures and not miss her in action because my camera was a little slow.  Hopefully it wasnot the photographer who was slow.   I have even located the best setting for sports so now I am set.  Oh, except the batteries, I need rechargeable batteries.  I keep forgetting to pick some up at Walmart.  So I guess I am off to Walmart to buy rechargeable batteries.  Ugh.  I have already been there once today.

I will try not to go so long in writing again. 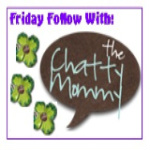 Crystal
I live in a small town in Kansas. Work at a wonderful preschool walking distance from our house. I am a wife to the most handsome, hardworking, wonderful father. We have been married for a short 22 years. A mother to 2 beautiful girls and 1 handsome boy. Our kids keep us pretty busy with all their activities but we would not have it any other way. I enjoy being at home with my family, baking, gardening and I love it when I find a good bargain. Thanks for stopping by.

Visits from my friends